For individuals Official documents with a seal

Interpreting We do interpretation for all types of events from conferences to weddings. Everything about interpreting

Escort or tour guide interpreting Events or city tours accompanied by an interpreter.

Localisation Translation of texts with regard to the target culture.

Translation and study services Translation of university theses and diplomas.

Proofreading Maximisation of a translation’s accuracy through additional checks.

Translation audit Check the quality of your translations.

How we work Our translation project process.

Career Become part of our team

References See clients who trust us.

About us It’s all about the people. Check out the Translata team.

FAQs Check out questions and queries.

Blog Read our e-books and articles on languages, translations, localization and foreign trade.

E-book - Translation Procurement Save time and money with valuable insights into the translation world.

Translata Briefing Key info to work better with other languages.

Before a public instrument (official government document) can be used in a country other than the one it was issued in, the local authorities may require higher authentication. This is precisely the purpose of an apostille (also known as apostillisation).

Join our community of 7,461 entrepreneurs, marketers, and managers and get practical tips on the translation industry and doing business abroad.

An apostille is a higher form of authentication for a document or person (sworn translator, notary public). It replaces what’s known as superlegalisation – another form of higher authentication for official documents. By affixing an apostille to an official document, it can be used within the territory of any signatory country that has ratified the Apostille Convention (or Hague Treaty Convention). If a document is to be used in a country that’s not part of the Apostille Convention, a higher level of certification is required in the form of superlegalisation, which is done at the Consular Department of the Ministry of Foreign and European Affairs.

An apostille is a certificate issued by a competent authority of a state that’s a signatory party to the Hague Convention. An apostille authentication shortens the process of obtaining higher authentication for foreign public instruments. A public instrument that’s affixed with an apostille may be used without further verification in the territory of another contracting party to the Convention and in dealings with any said party’s authorities. An apostille is issued for use in a particular signatory state to the Convention, therefore an apostille certificate should not be translated in another state.

The foreign authorities can thereby be sure that the document you’re submitting is not forged and has been issued by a body authorised to do so. 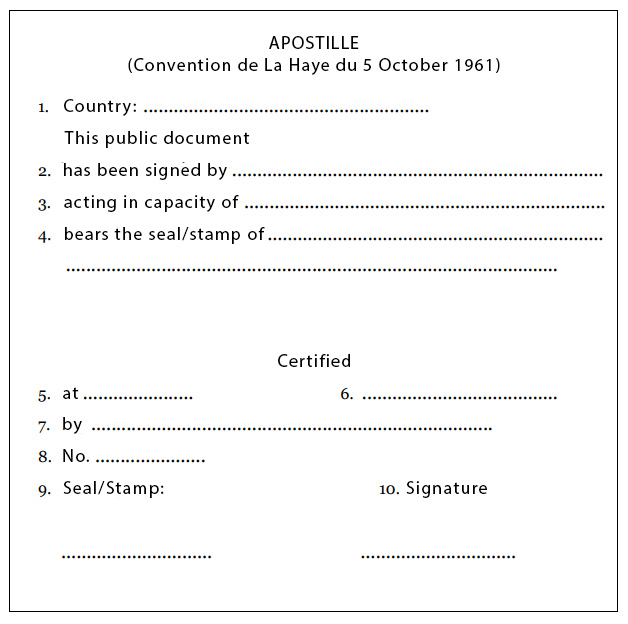 Who issues an apostille?

A list of the most frequently translated documents and the office that apostilles them:

In what language is the apostille issued?

When is an apostille needed?

You don’t always need an apostille. It’s only needed if the authorities you’re submitting the translated document(s) to require it. We recommend checking with the foreign office in advance what documents require higher authentication (apostille, superlegalisation).

What should you do if you need to provide a certified translation of a document abroad?

What documents can’t be apostilled?

Electronically issued documents are not public instruments in the Slovak Republic, as they are not stamped with the state coat of arms and are not signed by authorised employees. Therefore, documents in digital format cannot be apostilled. If you need to authenticate an electronic document, we recommend asking the state institution in question to issue a physical document for use abroad.

Be careful also with notarised documents. It’s not possible to apostille a document in Slovakia if it has been certified by a trainee notary (it must be verified by a notary public or a notary candidate). The competent authorities also have the right to refuse to certify a document that has been issued in violation of applicable legislation of the Slovak Republic or that contravenes the principles of international law.

Legal entities, banks, companies, or agencies do not issue official documents (public instruments) in Slovakia. If foreign partners (in a country that has acceded to the Hague Apostille Convention) request their authentication, you can proceed as follows: The original document will be signed by the company statutory seat in the presence of a notary public, and then the notary public will be apostilled by the relevant regional court. The Slovak Chamber of Commerce and Industry will confirm the existence of the business entity on the original document. A sworn translator will then translate the document. The translator can then be apostilled by any regional court. 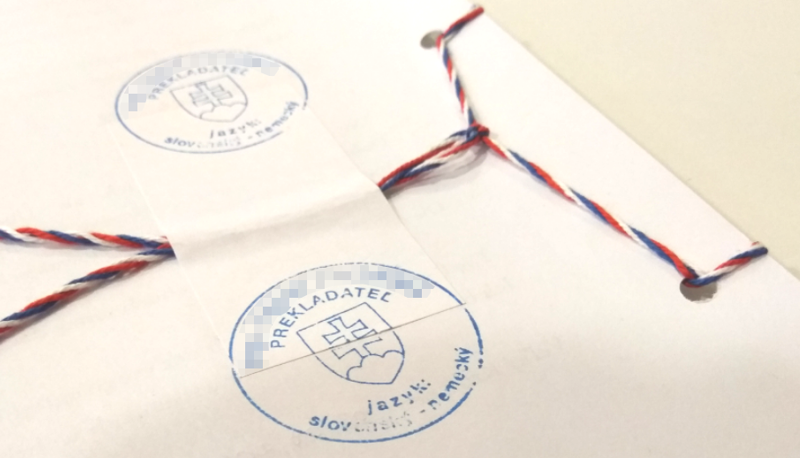 Backside of a certified translation.

Detailed information on authenticating documents and updated list of countries that are members of the Apostille Convention (sometimes insufficiently referred to as the Hague Convention) can be found on the official website of the Ministry of Foreign Affairs of the Slovak Republic.

It's a dream come true for me to work for a company where I trust the people and the services 100%. Peter Drucker was right about one thing: "The best way to predict the future is to create it," which is why it'll be my pleasure to brief you on the future direction of the translation sphere as well as the hidden pitfalls of marketing.